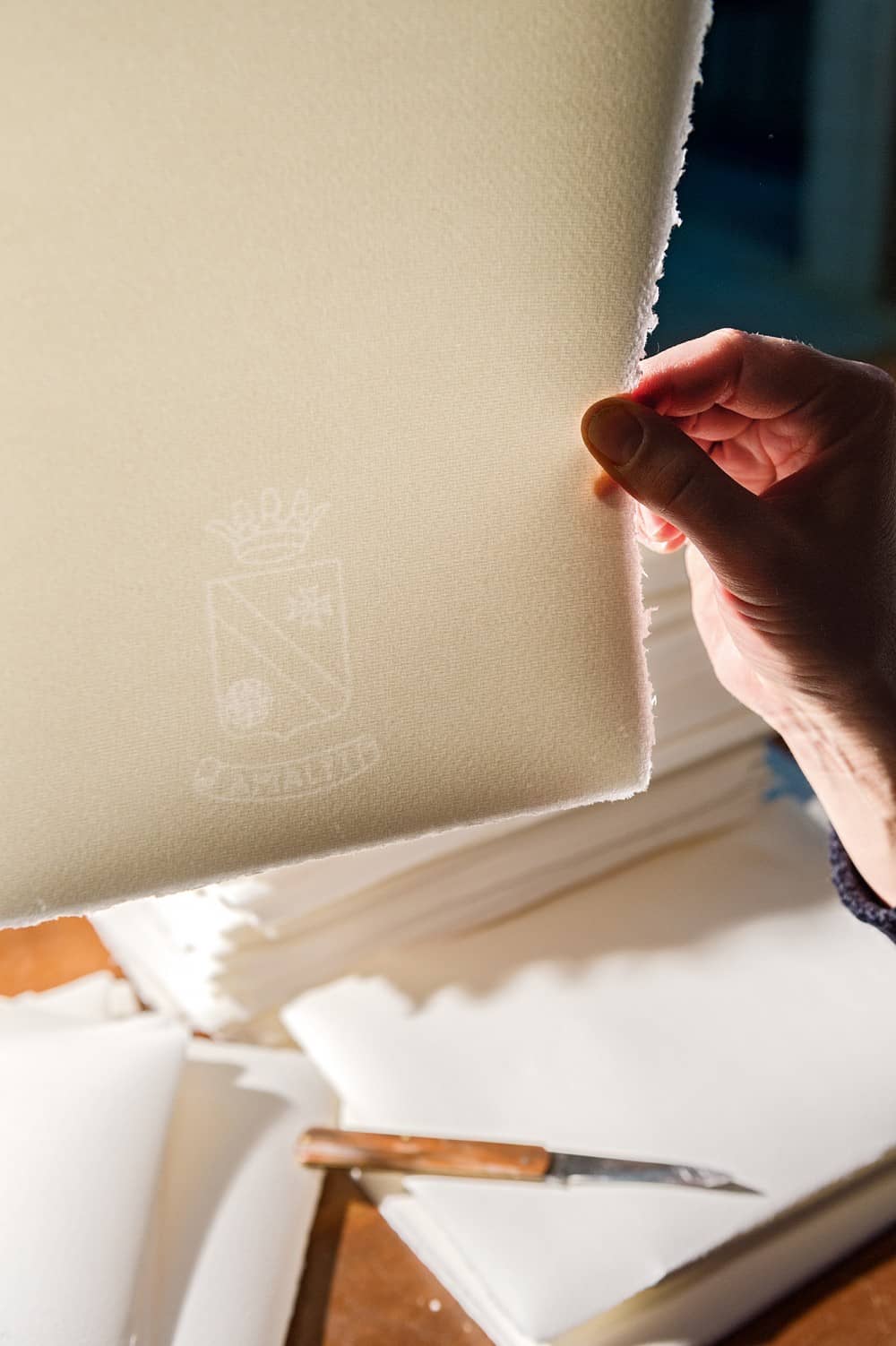 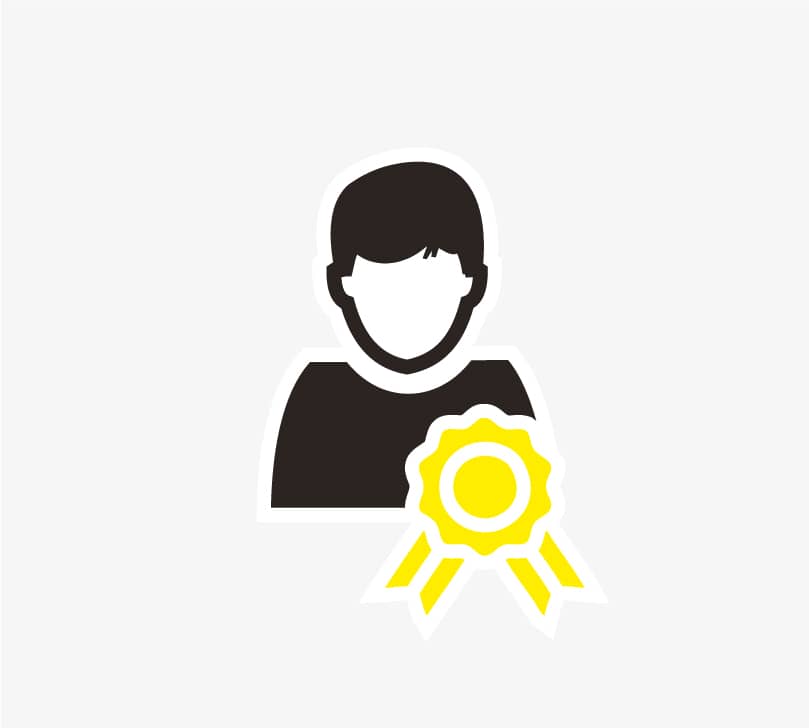 A visit to an ancient mill on the River Canneto, in Amalfi, where the Amatruda family continues the timeless tradition of hand-made paper. Preserving techniques that have remained unchanged since the Middle Ages

With special thanks to Sicilian cassata. This famous and delicious dessert, typical of the island, played an important role in the survival of the Amatruda paper mill. In the first half of the 20th century, when systematic industrialisation and the development of more modern commercial arteries were heavily penalising the increasingly isolated Amalfi, Ferdinando Amatruda and his son Luigino (the same “Don Luigi” who, in his later years, was highly revered among the most sophisticated publishers) succeeded in keeping the family activity alive thanks to a particular white paper known as “briglia”, which was widely used by pastry shops in Southern Italy, as well as by law firms. Even today, at the zenith of email and ebooks, it is not easy to keep afloat; but luckily, luxury books and wedding announcements have replaced Sicilian desserts and legal folders.
Don Luigi’s daughter, Antonietta, carries on the family trade with philological rigour, in keeping with her father’s principles and with the history of the Amatruda family, who have been associated with paper production since the 15th century. Antonietta is ably assisted by her sister Teresa, her brother-in-law Lucio and her nephew Giuseppe Amendola, as well as by a handful of employees who have been working with the company for decades. Indeed, the production of handmade paper at the ancient bridge mill on the River Canneto has substantially remained unchanged since the Middle Ages, when paper was made from rags (“Bambagina”, as it was called around here). Now, as then, the water that descends from the heights of the Amalfi hinterland through the Valle dei Mulini is used to produce a cotton or cellulose pulp almost without impurities. Also bearing witness to the many centuries of the mill’s activity are the ancient stone tubs, called vats, into which the water was conveyed by opening a stopper that was linked to a chain; the water flowing into the vat moved a wheel that put into motion a transmission shaft attached to a spiked wooden mallet that pounded and reduced the rags to pulp.

Today, as centuries ago, the artisans make the sheets of paper and determine their grammage by dipping a mould called “cassio” (a thick net of bronze wires with a wooden frame of maritime pine and a watermark in the middle) into the vat. The pulp sticks to the mould forming a sheet, which the “ponitore” (literally the “placer”) transfers onto felt, and the process is repeated to form a pile of sheets alternated to felt. This pile is then pressed to remove excess water. The drying phase takes place in large, 19th-century airing rooms known as “Spandituro”, located at the top of the building, where the necessary ventilation is guaranteed by big windows. The characteristic frames, or “tese”, made of galvanised iron wire where the damp sheets were hung to dry are now aided by the warm air produced in special ovens, also fitted with frames. Traditionally, the manufacturing process also included the addition of a glue obtained from boiled animal hides, a special pressing phase and the final smoothing of the paper with a smooth-headed hammer (“o’ maglietto”).

Amatruda employs a variety of production methods with machines that come from many different eras, and the rooms of the paper mill are like a compendium on the evolution of the paper industry, from the 17th-century innovation known as the “Hollander beater”, which had a wheel fitted with metal blades that beat the rags to pulp, to the cylinder mould machine that was introduced in the 19th century. This paper making machine was based on the principle of manual production, replacing the mould with a cylinder that had a similar net of bronze wire and with which it was possible to produce continuous sheets that were laid on felt, pressed by means of a granite roll and gathered by a wooden “mallet”. Although Amatruda possesses an original cylinder mould machine in iron, today the paper mill opts for a more recent version, which differs from the 19th-century machine in the steel structure (more reliable than the iron one, reducing impurities on the sheets), in the vibrating screen that replaces the sedimentation tank and, above all, in the production of single sheets, thus avoiding unnatural fraying due to tearing. 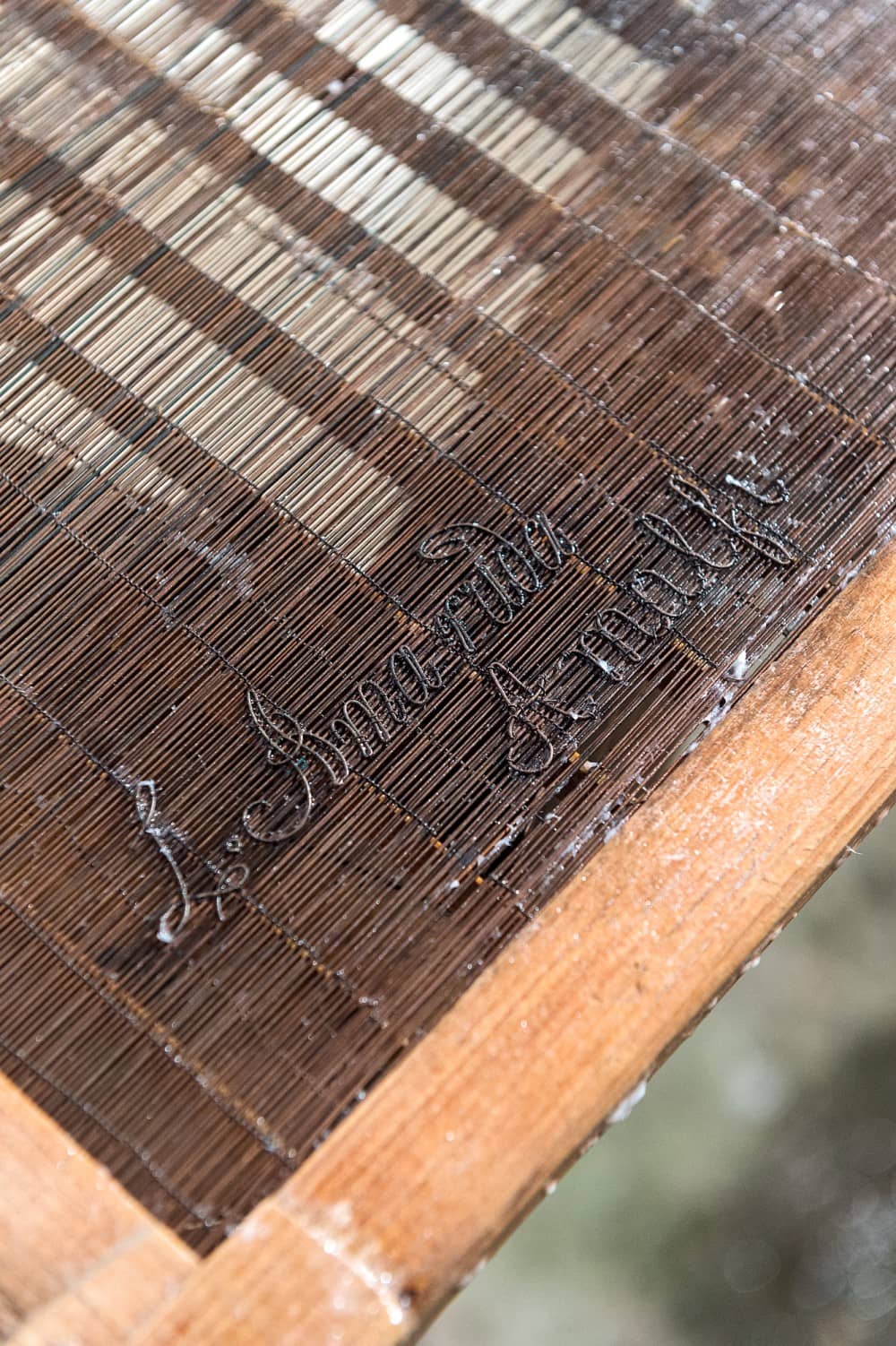 As a result, Amatruda can make paper in a vast range of formats (from business cards to 70 x 100 cm sheets) to a standard of quality that is almost beyond compare, as ascertained by philosopher and politician Massimo Cacciari, who knows something about paper and books… Pure white sheets of paper that speak eloquently of the land where they saw the light of day, with its nature, its waters and its hand crafting heritage stemming directly from the times when Amalfi’s merchants learned the technique from the Arabs, around a millennium ago, who in turn picked up the secrets of paper as they travelled along the boundless trade routes of Asia. It is only a pity that Antonietta Amatruda and her family do not sell the special sheets they make adding into the mixture the wildflowers (borage, elder, snapdragon, onion flowers with a mother-of-pearl effect…) that are picked in May in the woods surrounding the mill… Well, perhaps they may reconsider! 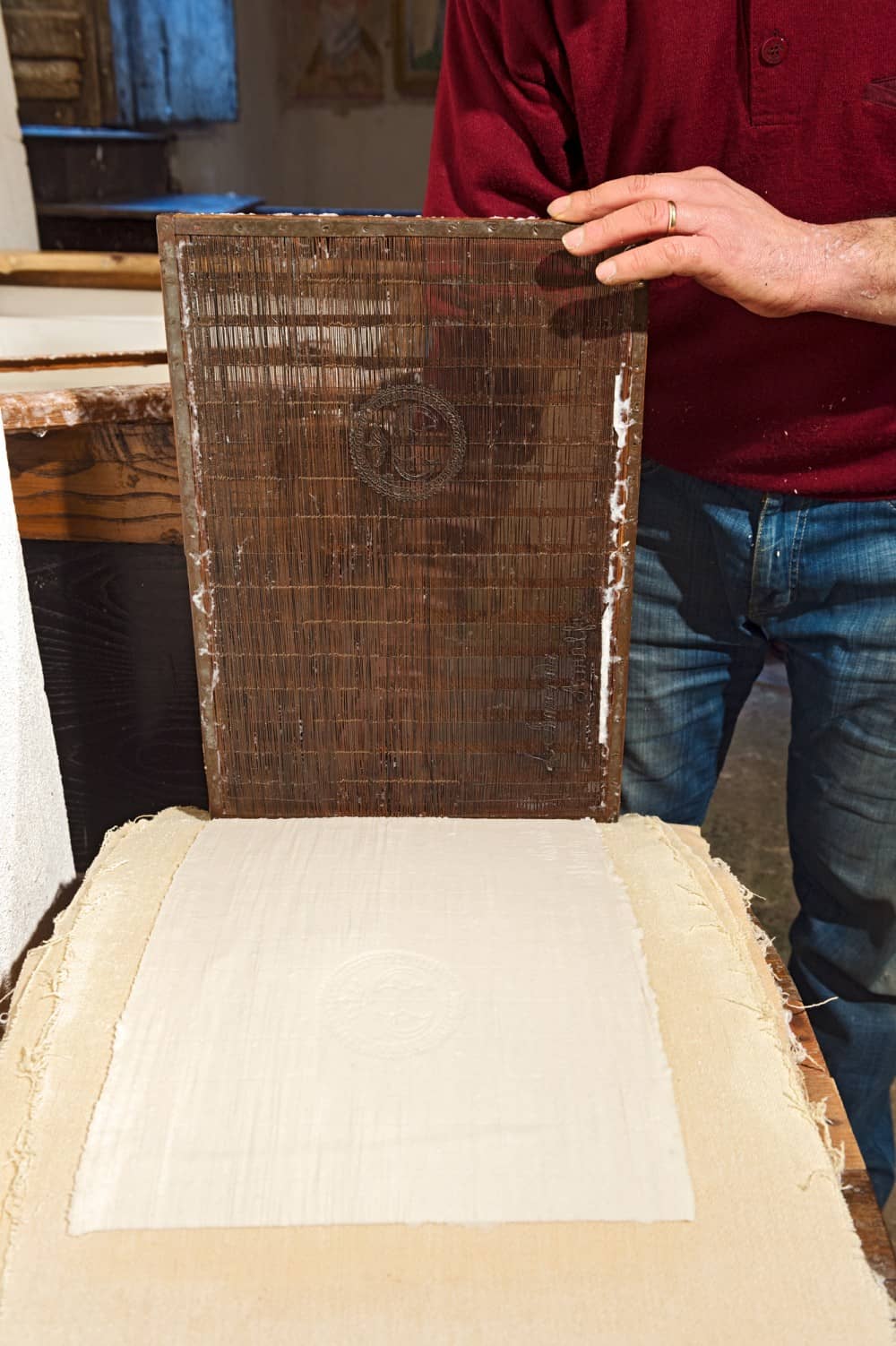