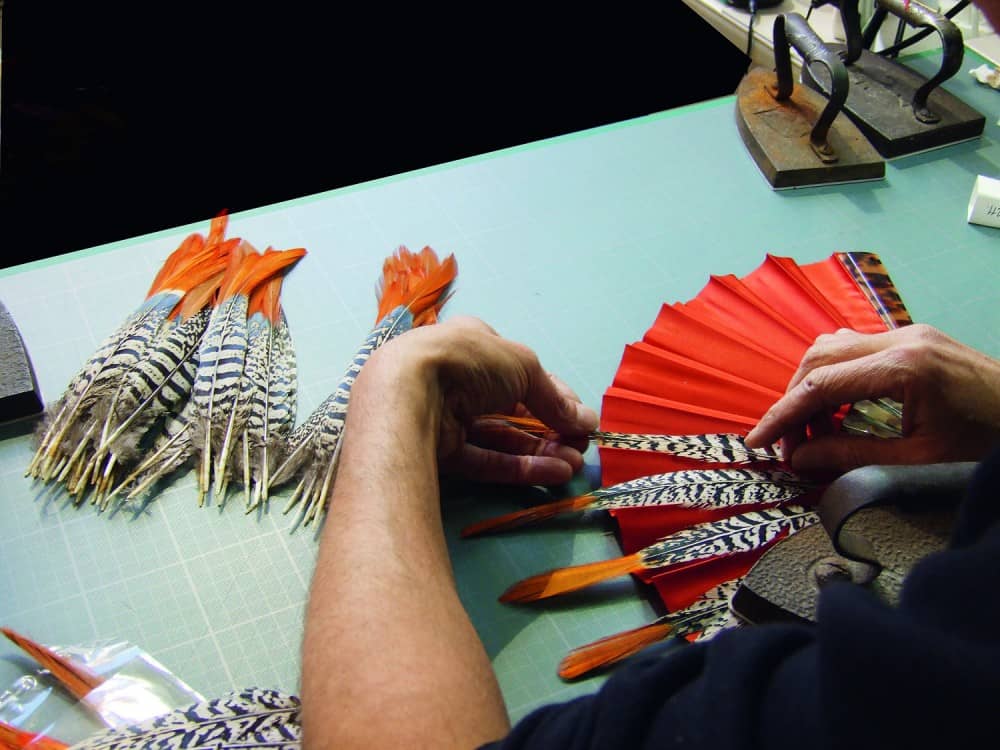 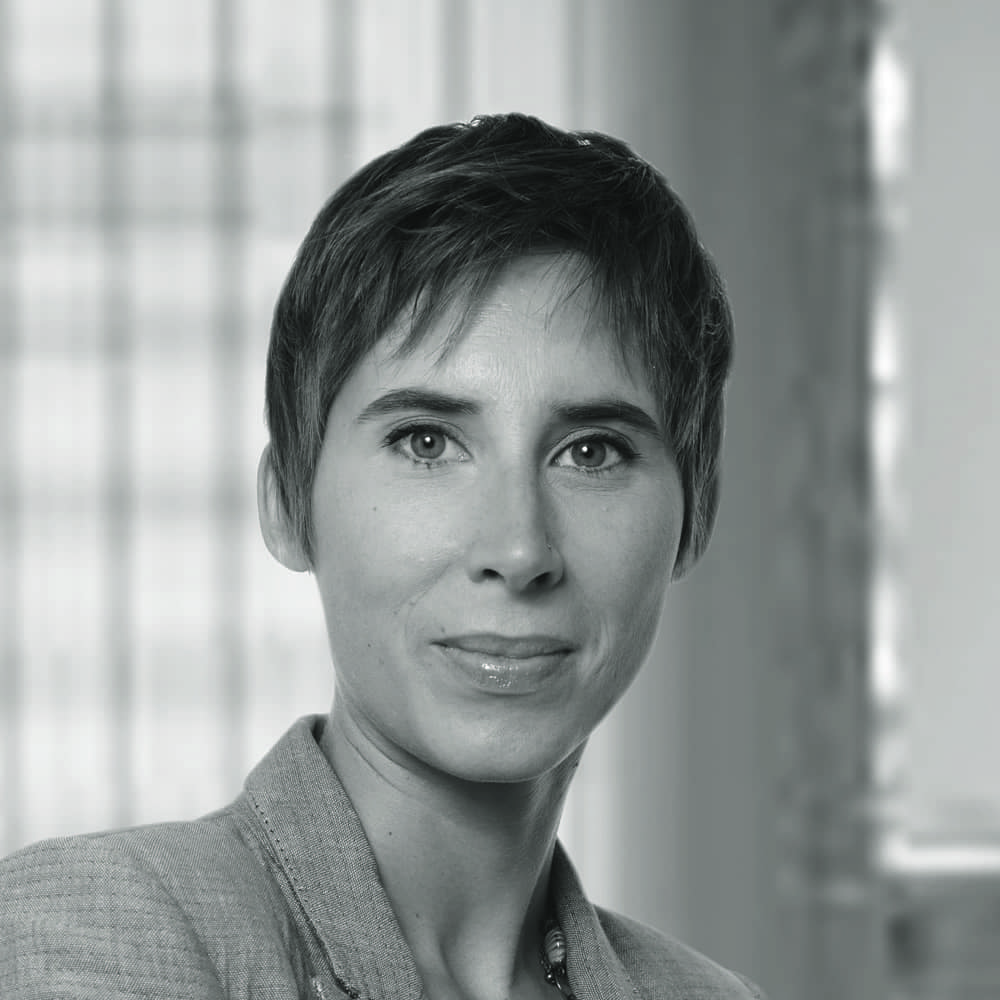 “As far as I can recollect, I have always had a fan…” says the 30 year old Parisian, Raphaëlle de Panafieu: when she was a child, her father always brought fans back from his frequent travels to Asia for her and both her sisters. One day she wanted to buy a fan with her own money, but she didn’t like the Asian and the Spanish ones sold on the seafront. They fulfilled indeed their requested basic function, but were too “Asian”, or too “Spanish” according to her taste: they weren’t fashionable.
Raphaëlle wanted something better. This is how her marvellous adventure begun.
In 2009, Raphaëlle started working for Ventilo – a high-end woman’s prêt-à-porter brand – as research manager for Department Stores in Asia, Northern America and the Middle East.
Eloïse Gilles had previously worked for Louis Vuitton and was then dealing with luxury brands and their identity.
Both were just thirty years old. Together, they decided to give the fan another chance. This was something very easy to decide, but much harder to implement, because fan making specialists had almost disappeared in Paris.

They had a meeting with Duvelleroy’s heir: a historical and world-renowned maison, also the official purveyor of most European courts in the 19th century, and above all the inventor of the famous “language of the fan”.
Fortune smiled on them: the owner had kept everything! All the archives and files, dating back to 1827, when the maison was established were there: casts, feathers, drawings, sequins, and obviously paper patterns. A true gold mine.

Eloïse Gilles and Raphaëlle de Panafieu bought the company. It was 2010: Sleeping Beauty was waking up. But at first they had to cope with the biggest challenge: technique.
Raphaëlle had studied Political Science, Eloïse graduated from ESSEC (the renowned Business School in Paris).
Thus they were designers, not artisans: it was necessary to learn and understand how fans work, by dissecting and analysing them. Luckily, they could count on the fundamental help of Maison Duvelleroy’s heir. “We made our first paper patterns drawing inspiration from the drawings reproduced in the Encyclopédie Universelle, for the ‘éventailliste’ headword,” remembers Raphaëlle. “Thus we understood all the geometry in a fan.” Then, it was necessary to learn the craftsmen’s lexicon, get acquainted with their language and find good workers. Eloïse and Raphaëlle are now fully legitimized: some ten artisans (sculptors, engravers, embroiderers, fabric ennoblers, specialists in pleating…) work to manufacture the “haute-façon” fans by Duvelleroy.
They have received many acknowledgments: in 2012 the small enterprise got the “Entreprise du patrimoine vivant” acknowledgment from the French government, as well as the “Talents du Luxe” award acknowledged by Centre du Luxe et de la Création in Paris. For the legendary “Moulin Rouge”, they designed fans using the same feathers of red ostriches worn by the dancers on the stage. The revival of the fan has started. 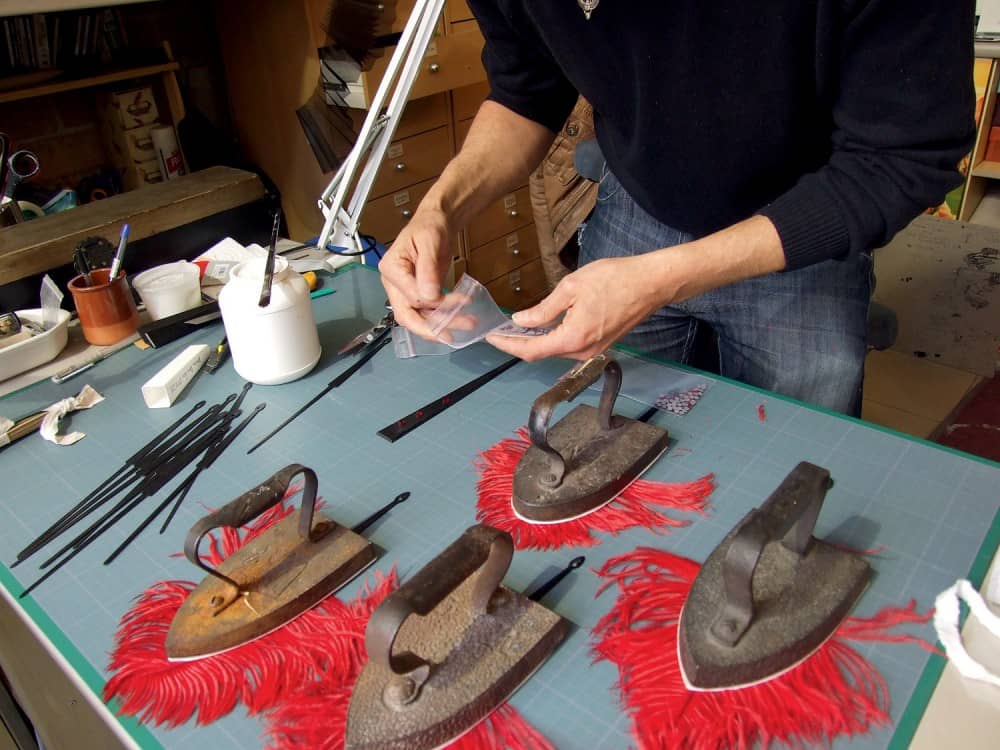 As a matter of fact, artisan skills and know-how are no longer missing now. What’s really missing is the usage of the fan. “Now women’s hands are never free. They hold mobiles, cigarettes, and bags… A free gesture has become a luxury, just like using a fan.” Thus what Raphaëlle and Eloïse offer is pure luxury: mother-of-pearl with pheasant feathers, horn and ostrich feathers…
Duvelleroy proposes two collections every year. Amongst the latest models is “Brush”: a sheet of hand-painted silk organdie with gold and silver leaf, and ebony mounting.
And for themselves? Raphaëlle has a 112-year-old fan in her bag: a mother-of-pearl and sequins specimen she bought at an auction in Drout just before purchasing the maison. “It was really expensive, but I carry it always with me: in summer and in winter.”
Since these ladies are modern women, as well as marketing experts, they got fans to enter Colette, which is a style temple in Paris. Their ingenious idea: a co-operation with designers to create simple paper fans, each conveying a message, such as “Air Conditioning” by Jean-Charles de Castelbajac, afterwards always present in the front rows during fashion shows in Paris. This is the story of pure artisan luxury for a timeless object. 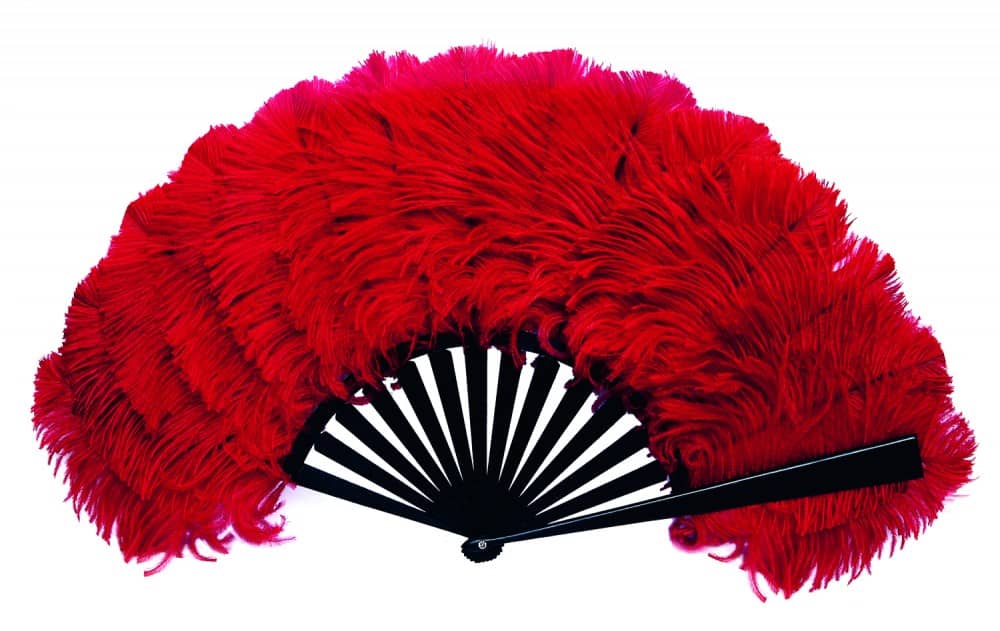